Oppenheimer And His Relationship To Hinduism

As he witnessed the first detonation of a nuclear weapon on July 16, 1945, a piece of Hindu scripture ran through the mind of Robert Oppenheimer: “Now I am become Death, the destroyer of worlds”. It is, perhaps, the most well-known line from the Bhagavad-Gita, but also the most misunderstood.

Oppenheimer died at the age of sixty-two in Princeton, New Jersey on February 18, 1967. As wartime head of the Los Alamos Laboratory, the birthplace of the Manhattan Project, he is rightly seen as the “father” of the atomic bomb. “We knew the world would not be the same,” he later recalled. “A few people laughed, a few people cried, most people were silent.” Oppenheimer, watching the fireball of the Trinity nuclear test, turned to Hinduism.

While he never became a Hindu in the devotional sense, Oppenheimer found it a useful philosophy to structure his life around. "He was obviously very attracted to this philosophy,” says Rev Dr Stephen Thompson, who holds a PhD in Sanskrit grammar and is currently reading a DPhil at Oxford University on other aspects of the language and Hindu faith. Oppenheimer’s interest in Hinduism was about more than a soundbite, it was a way of making sense of his actions.

The Bhagavad-Gita is 700-verse Hindu scripture, written in Sanskrit, that centres on a dialogue between a great warrior prince called Arjuna and his charioteer Lord Krishna, an incarnation of Vishnu. Facing an opposing army containing his friends and relatives, Arjuna is torn. But Krishna teaches him about a higher philosophy that will enable him to carry out his duties as a warrior irrespective of his personal concerns. This is known as the dharma, or holy duty. It is one of the four key lessons of the Bhagavad-Gita: desire or lust; wealth; the desire for righteousness or dharma; and the final state of total liberation, or moksha.

Seeking his counsel, Arjuna asks Krishna to reveal his universal form. Krishna obliges, and in verse twelve of the Gita he manifests as a sublime, terrifying being of many mouths and eyes. It is this moment that entered Oppenheimer’s mind in July 1945. “If the radiance of a thousand suns were to burst at once into the sky, that would be like the splendour of the mighty one,” was Oppenheimer’s translation of that moment in the desert of New Mexico.

In Hinduism, which has a non-linear concept of time, the great god is not only involved in the creation, but also the dissolution. In verse thirty-two, Krishna speaks the line brought to global attention by Oppenheimer. "The quotation 'Now I am become death, the destroyer of worlds', is literally the world-destroying time,” explains Thompson, adding that Oppenheimer’s Sanskrit teacher chose to translate “world-destroying time” as “death”, a common interpretation. Its meaning is simple: irrespective of what Arjuna does, everything is in the hands of the divine.

"Arjuna is a soldier, he has a duty to fight. Krishna not Arjuna will determine who lives and who dies and Arjuna should neither mourn nor rejoice over what fate has in store, but should be sublimely unattached to such results,” says Thompson. “And ultimately the most important thing is he should be devoted to Krishna. His faith will save Arjuna's soul." But Oppenheimer, seemingly, was never able to achieve this peace. "In some sort of crude sense which no vulgarity, no humour, no overstatements can quite extinguish," he said two years after the Trinity explosion, "the physicists have known sin; and this is a knowledge which they cannot lose.” 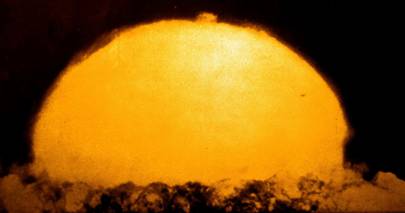 “He doesn't seem to believe that the soul is eternal, whereas Arjuna does,” says Thompson. “The fourth argument in the Gita is really that death is an illusion, that we're not born and we don't die. That's the philosophy really: that there's only one consciousness and that the whole of creation is a wonderful play.” Oppenheimer, it can be inferred, never believed that the people killed in Hiroshima and Nagasaki would not suffer. While he carried out his work dutifully, he could never accept that this could liberate him from the cycle of life and death. In stark contrast, Arjuna realises his error and decides to join the battle.

“Krishna is saying you have to simply do your duty as a warrior,” says Thompson. “If you were a priest you wouldn't have to do this, but you are a warrior and you have to perform it. In the larger scheme of things, presumably The Bomb represented the path of the battle against the forces of evil, which were epitomised by the forces of fascism.”

For Arjuna, it may have been comparatively easy for Arjuna to be indifferent to war because he believed the souls of his opponents would live on regardless. But Oppenheimer felt the consequences of the atomic bomb acutely. “He hadn't got that confidence that the destruction, ultimately, was an illusion,” says Thompson. Oppenheimer’s apparent inability to accept the idea of an immortal soul would always weigh heavy on his mind.

The Gardner Museum Theft; The Biggest Art Heist in History

How About a Monkey Pastry Chef Serving The Head of a Cat?

David Bowie Monopoly Can Have My Money